Droid Shout – Everything about Gadgets

Last month, a new Samsung smartphone with the model number SM-A015F appeared on the Geekbench database that revealed some of its specifications. Now, the same device has got the FCC certification as well which points at a nearby launch. Though the name of the device is not confirmed as of now, the rumors mill suggests that the SM-A015F could be dubbed the Samsung Galaxy A01. 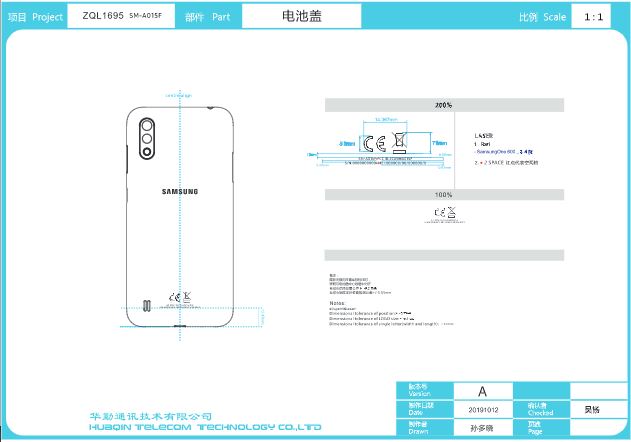 As per the FCC certification, the Samsung Galaxy A01 would feature a 2920 mAh (rated capacity) and a typical capacity of 3000 mAh.

Furthermore, the listing suggests that the Galaxy A01 will have dual SIM card support.

As seen in the image above, we will get a dual rear camera setup coming up with the Galaxy A01. At the top left, there is a slot which could very well be the 3.5mm headphone jack. We don’t see a rear-mounted fingerprint scanner which means that the Samsung Galaxy A01 will rely on just the traditional PIN/Pattern/Password mechanisms of unlocking the device (or there could be a facial unlocking mechanism, at most) as it will most likely be a budget device.

As far as the rest of the specifications are concerned, the Geekbench listing of the Galaxy A01 has already confirmed that the device will run on Android 10 out of the box. Moreover, the device will be powered with a 2.0GHz octa-core processor which will be coupled with 2GB of RAM and 16GB of internal memory.

Coming to the display front, we might be getting a 5.7-inch display coming up with the Galaxy A01.

As of now, this is all we know about the Galaxy A01, but we are sure to receive further intel on the same in the coming days.

What are your thoughts on the Samsung Galaxy A01? Do let us know in the comments section below.

OPPO Find X2 to Come With a 6.5-inch Punch-Hole Display